Dou doesn’t have goal. Perhaps that confuse you. But many Japanese understand dou without any descriptions. I know it is difficult for Westerners. But I don’t know why.

I think up the idea. Japanese philosophy of life is different from that of Westerners.

Ruth Benedict wrote “The Chrysanthemum and the Sword: Patterns of Japanese Culture” in 1946. Her work is very great. She said that Japan has a shame culture and Westerners has a guilt culture. It is one-sided but includes truth. Guilt is caused by doing. Shame is caused by being. 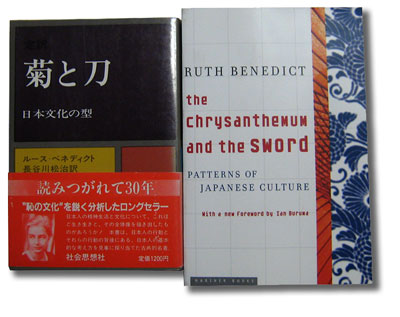 The West culture is great. That has brought us wonderful civilization. I really appreciate it. I think the fundamental power of the West is competition. It is necessary for us. But competition has caused some problems.

Dou doesn’t have competition. You wonder. Ju-do or Ken-do are martial arts. They make winners and losers. Isn’t it competition? Perhaps that is difficult for Westerners. Indeed it is competition, but competition against myself. The winner is the person who wins themselves.

Japanese don’t admire the person who win the game but lose themselves.

The masters of dou say the following words.

“Be free from all distracting thoughts.”

“Be oneness with the skill.”